Ars Electronica 2017 is not big, it is massive. Now I understand why people just post pictures : although I had made a strict selection in the threads I wanted to follow, it is impossible not only to see everything but to make some kind of overall analysis.

So, let’s go with fragments.

The Belgium Gluon Foundation is proposing a « new model for cooperation among artists, scientists and art collectors » by reversing the process and « having scientists in residence in the ateliers of top-name artists ».

Gluon organised a panel with Hans Ulrich Obrist, Paul Dujardin from Bozar in Bruxelles and the artists, which remained a bit basic in the thinking about art-science. 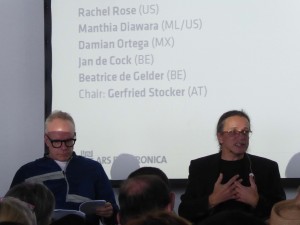 How does an « artist atelier » looks like nowaday ? Some artists still have studios but many others just need a room with a computer and others definitively need a professional research lab. This question was raised during the panel and left open for the moment.

In the booth presenting their project in the exhibition, Gluon referenced the « historical » projects such as CAVS and LACMA, but nothing since the « good old days ». 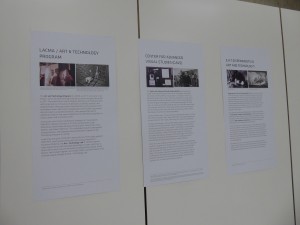