Cosmical Seeds by Ayako Ono on the ISS

JAXA, the Japanese Space Agency is pursuing its policy toward artistic and cultural projects and experiments aboard its Kibo module on the ISS/International Space Station.

The recent years have witnessed Dewey’s Forest, the space garden by Shiro Matsui in 2010 of which I had showed an « earthian » version in the 2009 @rt Outsiders festival, followed by his Message in a Bottle in 2011 performed by astronaut Alvin Drew during an EVA (the opening of the botlle is at about 13’24, but watching the whole clip is really worth it).

That same year 2011 saw two works by Takuro Osaka —Marbling painting on a sphere of water and Spiral Top.

This February 2012 it is the turn of Cosmical Seeds by Ayako Ono. 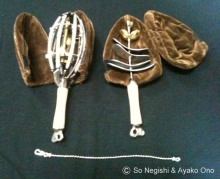 Cosmical Seeds is a pair of musical instrument designed by metal artist So Negishi and Ayako Ono. Astronaut, Daniel C. Burbank played them on February 10th, 2012. Two pieces of music act as background music. One is the special edition for the instruments, named « Dream Starts » composed by Jaakko Saari and another is a two minute edition of « Kiyoraka na sora » composed by pianist, Akira Takahashi.

JAXA is the only space agency to have this structured long term policy that brings artworks in the ISS. Why the other countries participating to the ISS don’t do the same? If artworks like Prisma (2001) by French Pierre Comte have reached the International Space Station or have been onboard the Space Shuttle like Boundless Cubic Lunar Aperture (1989) by American Lowry Burgess, it has never been through a specific dedicated policy of their respective space agencies and, although ESA/European Space Agency has conducted studies on the topic (I was part of one of them), so far, it doesn’t have transformed them into some concrete organised project.