Back home. Looking at my ToDo List I did not even see half of what I wanted to see or talked to half of the people I wanted to talk with … Always this same ambiguous feeling since the festival mostly takes place at POST City : what am I looking at ? Is it good that it has become this big supermarket offering a whole range of things or is it bad that it does not always provide the artworks and projects the caring conditions for a deep encounter with the audience ?

According to some of my friends that lives in the United States of America, Ars Electronica is mind blowing and there is not such an event there showing so much good things in this field. Am I a spoiled child then ? I still believe that sometimes less is more but as we could go forever trying to decide if the glass is half empty or half full, let’s forget the rambling and go with some bits and pieces that made their ways to my cognitive emotional sytem.

The following is not a true art critic or an art analysis, and I am not sure it is a real blog post either, but it is a bit more than just plain pictures without legends.

We Should Take Nothing for Granted – Soft Probe, Matthew Biederman and Marko Peljhan

« We Should Take Nothing for Granted – Soft Probe », Matthew Biederman and Marko Peljhan, image Annick Bureaud

A black box is standing in the middle of the room. On top of it, on a left screen, Dwight Eisenhower is delivering his presidential farewell address of 1961 stating that “an alert and knowledgeable citizenry can compel the proper meshing of the huge industrial and military machinery of defense with our peaceful methods and goals.” The right screen displays various data and activities. Eisenhower’s message serves as a point of departure for a set of systemic activities in the fields of communications security, data aggregation, analysis and display.

In between what I could label a neo military and post constructivist aesthetics, with a cold and authoritarian aspect, the piece is in total coherence with its content. And even more so, when one gets a text message from the machine. 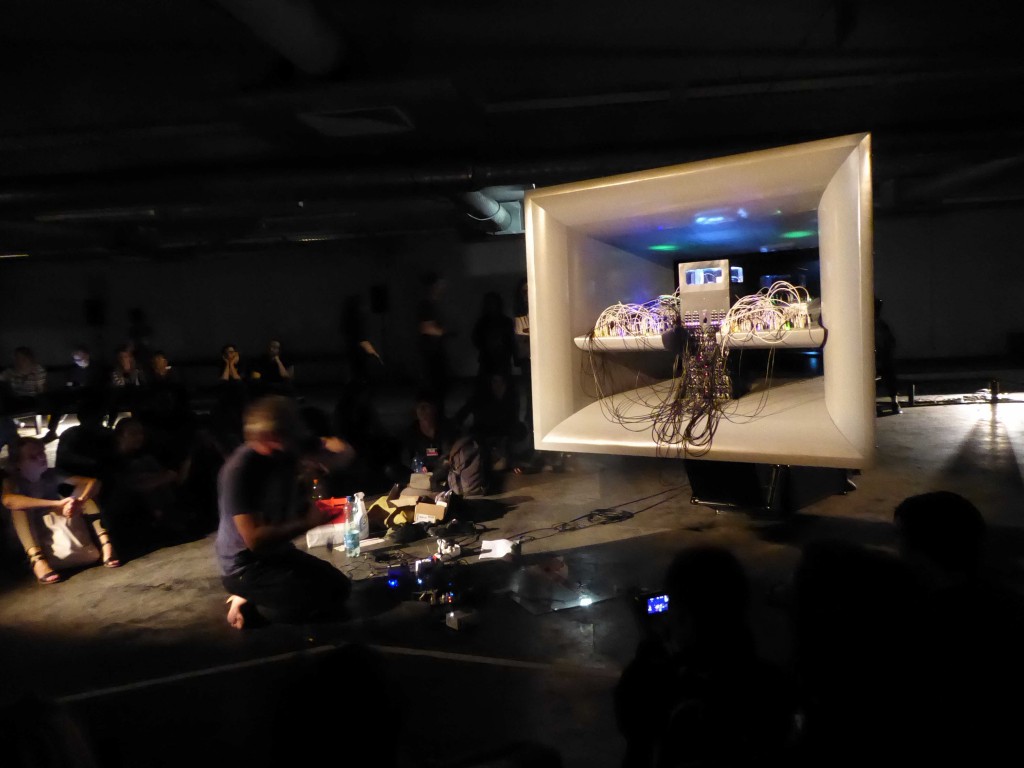 Guy Ben-Ary has been working since the early 2000 on the question of the emergence of cognition, thought and creativity. Fish and Chips, that was also exhibited at Ars Electronica in 2001, was the first one of a series of works.

CellF is the most recent creation by Ben Ary. Skin cells from the artist were transformed into brain cells, building an active neural network. This “external brain” is given a “body” made of analog synthesizers (no computers here) and alluding to the history of music and sound in its shape. In a kind of jam session, this biocybernetic double of Ben Ary “plays” with musicians, reacting to their music.

After years of lab incubator aesthetics, CellF is bringing an elegant, coherent and thought through alternative to showing alive bioart without going into the crude anthropomorphic cyborg seductive bodies.

The performance I saw was with Lucas Abela playing with glass slab. 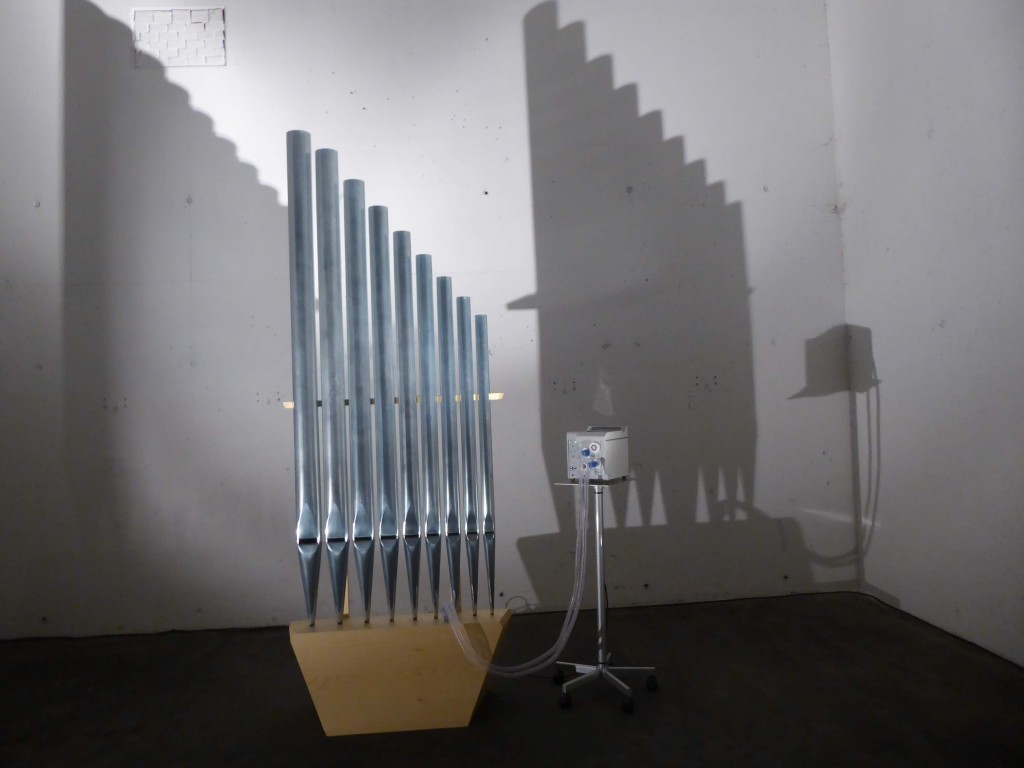 Some organ pipes have been selected and mounted on a wooden stand. They are playing a fragment of music referencing Johannes Brahms German Requiem.

The breath allowing the pipes to play is provided by a medical artificial breathing machine that, when we come closer, we can hear.

This is a very simple and very powerful work that would need a longer comment.

VideoSculpture XXII (Everything Now is Measured by After), Emmanuel Van der Auwera, 2016 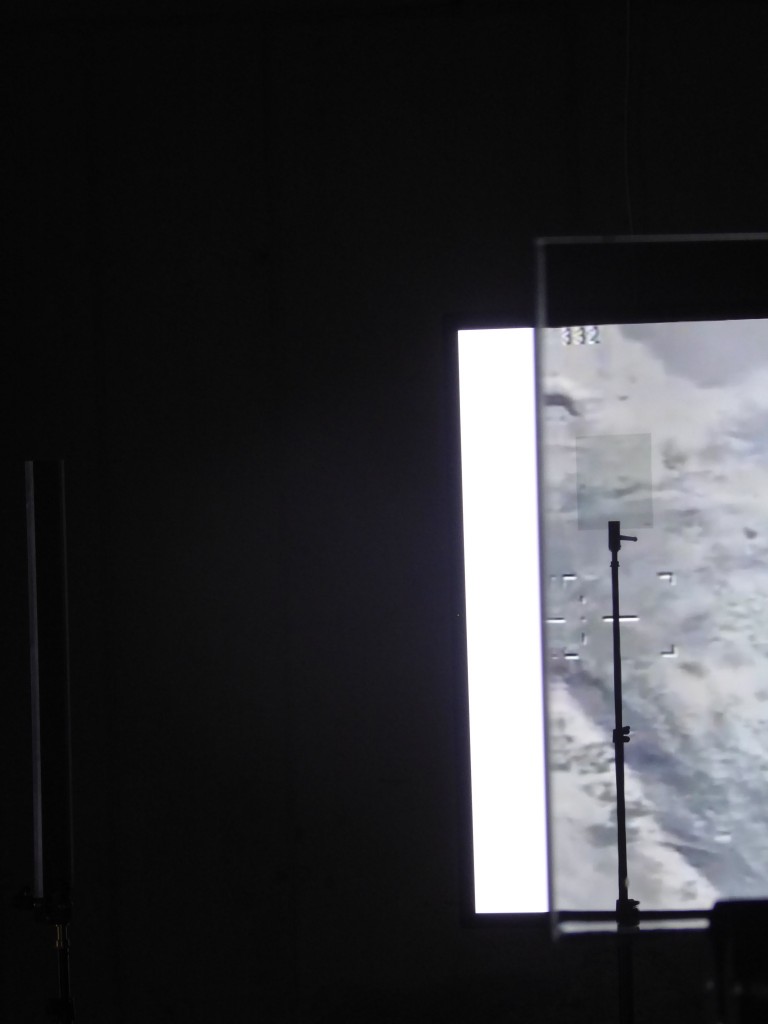 Set up on three different walls, three big screens for commercial display are showing nothing but white light. In the middle of the space that they delineate are positioned small polarized sheets of various sizes. When looking through them toward the commercial screens one can see videos of war bombing and destructions, the images having the same aspect as the ones produced by military cameras and devices or satellites.

What at first sight was looking like « another media art installation » became as a sort of metaphoric minefield where the poles supporting the small screens were landmarks for the danger. 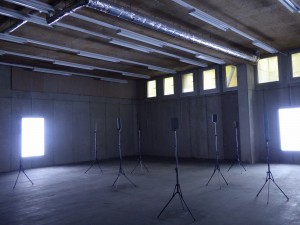 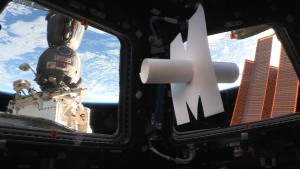 Inner Telescope is a space poem, specially conceived for zero gravity, and created by Eduardo Kac in collaboration with French astronaut Thomas Pesquet during his stay in the International Space Station. This one was of course not new to me but always a deep pleasure to see.

The exhibition showed quite a lot of sound works among which (Un)Measurements by Gil Delindro in which prepared microphones are rotating and « reading » a dead tree. 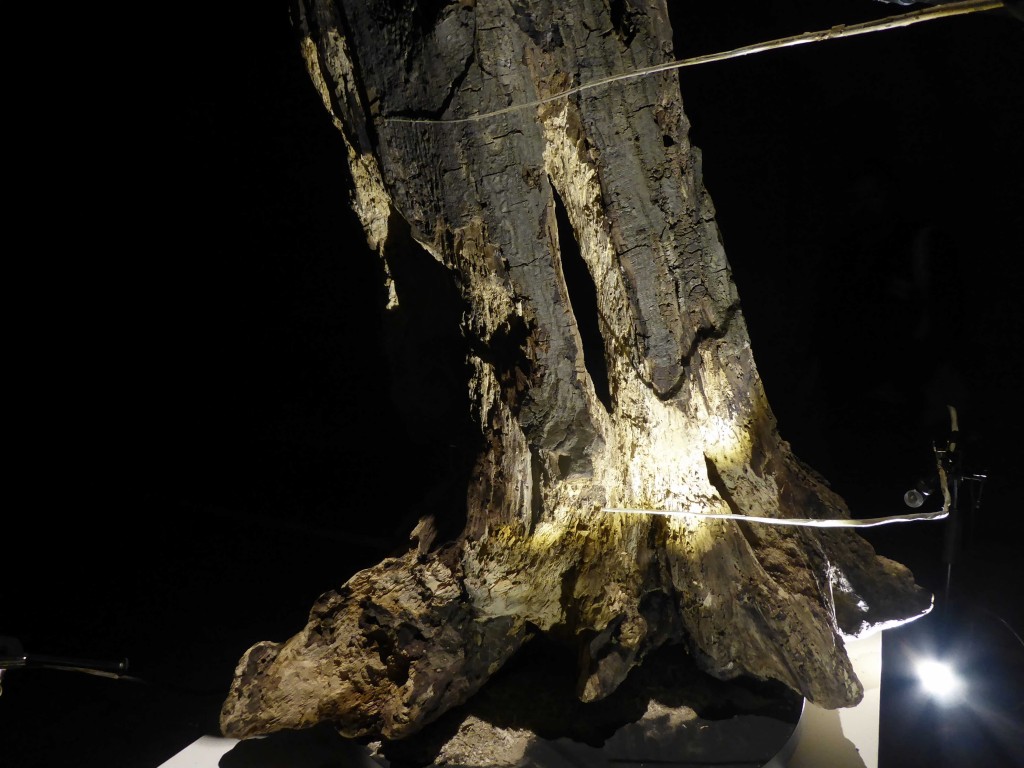 On the light side, I loved the 3D-printed organic-like robots of Ready to Crawl, by Hiroshi Sugihara and Shunji Yamanaka from the Prototyping & Design Laboratory, University of Tokyo. Somehow, they looked like Karl Sims digital creatures made true. They look nice, soft and are fun to play with. 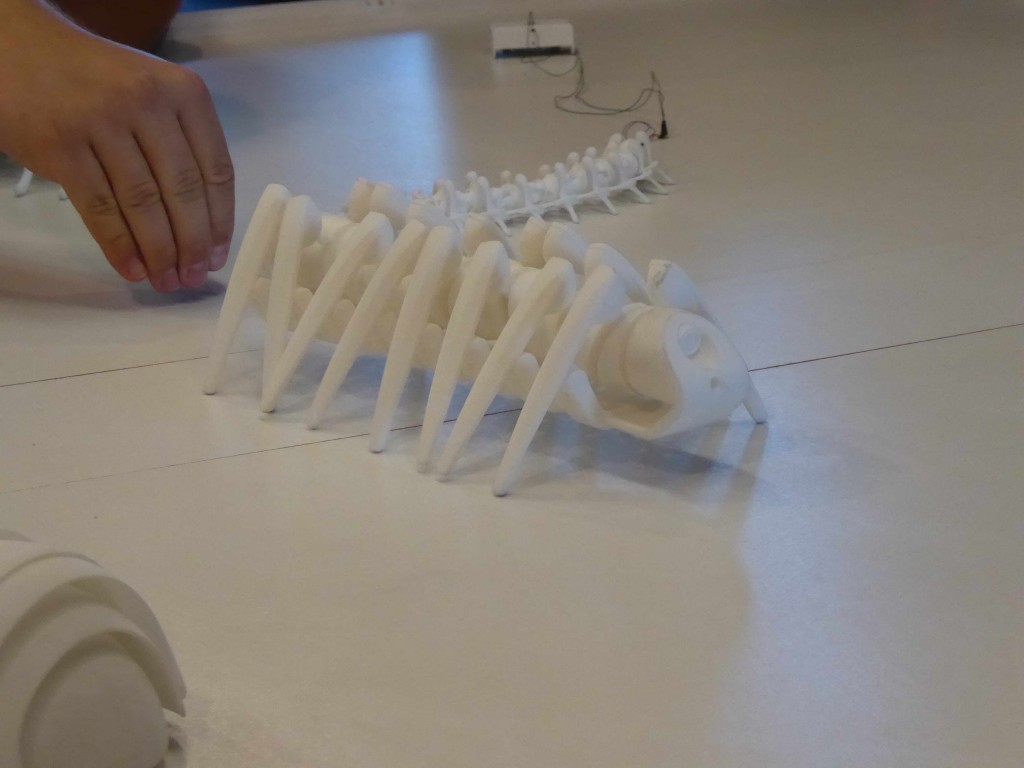 And of course, I loved the music performance by the Japanese group playing … fans! … of which I have zero good image …